by Ronica O’Hara
“The mouth is the doorway to the body,” so the saying goes, and today we know just how true that is. Years ago, the biannual trip to the dentist was typically a simple “drill-and-fill” operation, with other health concerns not given a second glance. Now, emerging research shows that when we neglect basic oral care—even that annoying task of nightly or post-meal flossing—we endanger our heart, lungs, kidneys and even our brains by allowing the buildup of pernicious bacteria in our gums.
In April, University of Louisville School of Dentistry researchers reported that the bacteria P. gingivalis, which flourishes in gum disease, was found in brain samples of deceased Alzheimer’s patients—and that inflammation, swelling and bleeding in gums can transport the bacteria from the mouth into the bloodstream simply through chewing or teeth-brushing. The study also linked the bacteria to rheumatoid arthritis and aspiration pneumonia.
Advanced gum disease also increases the risk of cancer by 24 percent, especially lung and colorectal cancers; quadruples the rate of kidney disease; and increases the risk of strokes, coronary artery disease, diabetes and pre-term births, other studies show.
These findings have sobering implications for the nearly half of the American adults over age 30 and 70 percent of adults 65 and older with gum disease. “Science has proven that a healthy mouth is a healthy body,” says San Francisco holistic dentist Nammy Patel, author of Age With Style: Your Guide to a Youthful Smile & Healthy Living.

It’s part of the reason for the fresh interest in holistic dentistry, sometimes called biologic dentistry. “We look at the entire body, not just the mouth,” says Bernice Teplitsky, DDS, of Wrigleyville Dental, in Chicago, and president of the Holistic Dental Association (HDA), based in Coral Gables, Florida. Holistic dentists abstain from toxic materials, remove amalgam fillings, may be wary of root canals and focus on minimally invasive procedures—some of which may be high-tech and cutting-edge, such as lasers to clean teeth and gums, ozone therapy to slow the growth of infections and air abrasion to “sandblast” away small areas of tooth decay.
Holistic dentists work closely with a wide range of other complementary practitioners. “We look at the underlying causes for gum disease and cavities: Is it your diet, or hormonal changes or acid reflux?” Patel explains. That may mean prescribing a head massage, acupuncture session, meditation lessons or dietary counseling. They may run blood tests for biocompatibility of materials and incorporate approaches from Traditional Chinese Medicine, Ayurveda, herbology, homeopathy, iridology, craniosacral therapy and energy medicine. They will look for signs of sleep apnea and often treat it. However, with the added tests and consultations, they tend to be more expensive, with many procedures not covered by dental insurance. Their numbers are small: Only 391 of 199,000 American dentists belong to the HDA, or about one in 500.
Yet the natural health movement that drives holistic dentistry is having an effect on the profession at large. Many dentists nationwide, pressured by patients and aided by new technology, are abandoning toxic and invasive options for less harmful methods. Controversial mercury amalgam fillings are being edged out by less toxic options like resin composites that match teeth color; the amount of mercury sold in the U.S. for dental amalgams fell by half between 2001 and 2013.
Conventional dental X-rays, which in a Yale study published in the American Cancer Association journal Cancer were linked to non-cancerous brain tumors, are yielding to computerized digital X-rays with a fifth of the radiation: As many as two out of three dentists have switched over. And aided by computer imaging software and 3-D printers, dentists are fabricating new crowns, implants, bridges and dentures right in the office, instead of using what Austin, Texas, dentist David Frank calls “intrusive analog [gooey impressions] that left patients feeling claustrophobic, highly anxious and consistently worried about gagging.”

When visiting a dentist, whether holistic or not, it’s wise to be prepared with a natural health mindset. Some questions to ask are:

What are you filling the cavity with? Just say no to amalgam, a mixture of heavy metals, of which about half is elemental mercury that slowly releases toxic vapors. Plus, “Heavy metals can leak into the enamel tubes of the teeth causing the teeth to appear gray or dark blue and making them brittle over time,” warns Los Angeles cosmetic dentist Rhonda Kalasho. Instead, ask for relatively nontoxic options such as porcelain or composite resins, which can be made of materials such as silica, ceramic, plastics and zirconium oxide. Some composite resins contain the endocrine disrupters Bis-GMA or BPA; for extra protection, ask for one that doesn’t, or ask the dentist to use a rubber dam to prevent swallowing it. 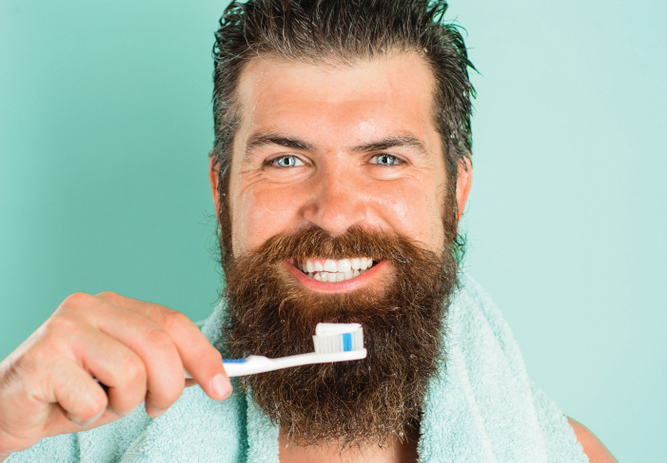 Should I have my amalgam fillings removed? Holistic dentists like Patel give a strong yes. “The problem arises with mercury when you chew or brush your teeth. The abrasion creates heat and causes the mercury to off-gas. Those vapors get swallowed and go into your body, where they’re stored—and that creates significant health hazards—because we’re talking about a known poison,” she says. Other dentists disagree about removal, citing its risks: Holistic pioneer Dr. Andrew Weil, for example, writes that removing amalgam fillings is often unnecessary, costly and stressful, and recommends exchanging them for composite resin only when they break down.

Do I really need antibiotics? Oregon State University researchers found in a study this year of 90,000 patients that the antibiotics often prescribed by dentists as prevention against infection are unnecessary 81 percent of the time, and contribute to antibiotic resistance. Typically, patients didn’t have the precise cardiac conditions that warranted the extra caution.

Is a root canal the best option? Some holistic dentists counsel against root canals, citing the risk of long-term health problems caused by lingering bacteria, and advocate the use of herbs, laser therapy or extractions instead. “If root canals were done 20 to 30 years ago, it is definitely a problem, because there were not enough technological advances to clean out all the bacteria which could cause chronic health complications,” says Patel. “Nowadays, depending on the tooth root, canals can be 99.9 percent cleaned by lasers.”

Back to the Basics

Considering the stakes, preventive care is all-important and there are many natural options to guarantee robust oral health. At the natural health store or drugstore, consider the following options:

Flossing: Some smooth, slippery flosses are coated with toxic, Teflon-like perfluorinated polymers linked to kidney and testicular cancer, ulcerative colitis and hormonal disruptions. A recent study found higher levels in women using those flosses. Instead, use the old-fashioned nylon kind or try out new flosses made of biodegradable silk or bamboo or those infused with antimicrobial tea tree oil. Or, consider a water flosser, which Canadian researchers found were 29 percent more effective at plaque removal than string floss.

Mouthwash: Mouthwashes containing alcohol significantly raise the risk of throat cancer, Australian researchers found. Instead, opt for super-healthy green tea as a mouthwash, as well as a drink. Studies show that it protects teeth from erosion and promotes healthy gums. Another simple option is warm salt water, using one cup of water and one-half teaspoon of salt. A 2017 study by the Cochrane medical study organization found it is virtually as effective as the prescription antiseptic mouthwash chlorhexidine in reducing dental plaque and microbes.

Pulling: An ancient Ayurvedic remedy, this involves swishing a spoonful of organic coconut oil around the mouth and through the teeth for 10 to 20 minutes. The oil’s lauric acid, a natural antibacterial, has been found in studies to reduce plaque formation and fungal infections, as well as the strains of bacteria linked to bad breath and irritated gums.
Taking care of our teeth and gums is simply worth the daily time and trouble to facilitate long-term health. “Your oral care should be taken just as seriously as watching your diet,” advises Kalasho.