by April Thompson
In Zen monasteries, the head cook (known as the tenzo) is one of the most important positions a monk can hold; Eihei Dogen, founder of Soto Zen, one of the longest-established sects of Buddhism, said this is “because the position requires wholehearted practice.” In the 13th-century volume Instructions for the Zen Cook, Dogen wrote, “In preparing food, it is essential to be sincere and to respect each ingredient, regardless of how coarse or fine.”
Rituals around food are an important element of Buddhism, as with many spiritual traditions. But we don’t have to be a Buddhist or a practiced meditator to learn how to cook more mindfully, enjoy meals more fully and eat in better balance.
“Cooking can be a meditation. We cook with all our senses: We taste, touch and listen to determine if the pan is hot enough. You just have to be mindful,” says Jean-Philippe Cyr, author of The Buddhist Chef: 100 Simple, Feel-Good Vegan Recipes.
“Cooking is an act of love and generosity, so cooking should be done with care—taking the time to consider the ingredients and overall flavors of the meal, storing the vegetables properly, paying attention while you chop. These things are the foundation of a great meal,” says Gesshin Claire Greenwood, an ordained Zen priest in San Francisco. Greenwood trained in Buddhist monasteries in Japan for more than five years, experiences she draws from in her recent memoir and cookbook Just Enough: Vegan Recipes and Stories from Japan’s Buddhist Temples.
While vegetarianism is encouraged in all schools of Buddhism and most monasteries abstain from meat, it is not a strict requirement. Cyr, a vegan and practicing Buddhist of 20 years, takes seriously the concept of ahimsa, or “do no harm”, as a chef. “Veganism and Buddhism share the common value of compassion—compassion towards animals, as well as the Earth. Climate change caused by meat consumption causes a lot of harm, too,” says Cyr, of rural Quebec, Canada.
The “middle way” is an important Buddhist principle in the kitchen—striking the balance between indulgence and deprivation—the “just enough” in Greenwood’s cookbook title. “It’s important to use enough salt so that the food tastes good, but not so much that it’s overpowering. When we shop for food or eat a meal, we can also pay attention to when we’ve had enough,” she says.

Mindful eating can open up a beautiful new relationship to food, says Jan Chozen Bays, a Zen Buddhist priest and co-abbot of Great Vow Zen Monastery, in Clatskanie, Oregon. “This country is in an epidemic of out-of-balance eating. People are stressed out and fearful about eating, but cooking and eating should be inherently pleasurable human activities,” says Bays, the author of Mindful Eating: A Guide to Rediscovering a Healthy and Joyful Relationship with Food. “In Zen practice, mindful rituals help us learn to be present and peaceful during meals.”
Mindful eating is not about restrictions, but rather about curiosity and investigation—an adventure for the senses, says Bays. “Research shows that diets don’t work, as they rely on external sources rather than helping you to go inward and tap into the innate wisdom of your body.”

Tuning In at Mealtime

Rushing through meals mindlessly, we’ve become deaf to our body’s own signals of satiety, says Bays. “Go to the supermarket when you’re hungry, and head to the perimeter where the real food is and stop and ask your body, ‘Would you like oranges? Would broccoli be good for us?’ Tune into your cellular hunger,” she says.
At the Great Vow Zen Monastery, the first morning meal is conducted in silence, along “with a prayer to bring gratitude for the food and to all living beings whose life flows to us in our food,” says Bays, adding that research shows ceremonies and moments of reflection lead to more mindful, healthy eating.
“Instead of talking on the phone, try cooking in silence. Drawing your awareness to details like the smell of basil, the color of tomato and the touch of the spoon brings so much richness to the act of cooking,” says Bays.
Such a focus leads to a sense of appreciation for the ingredients of meals and life, says Myoju Erin Merk, a priest at the San Francisco Zen Center. “Making a meal is an active extension of our ‘sitting’ (meditation) practice.”

The Zen of Food

Here are a few simple tips from Buddhist priests and cooks on making mealtime more mindful.
Have a mid-meal gut check, suggests Jan Chozen Bays. “When your stomach feels three-quarters full, have a conversation with a friend or have something to drink before continuing to eat. Often you will find after 20 minutes you are actually full,” says the author and priest.
Myoju Erin Merk, a priest at the San Francisco Zen Center, suggests setting a phone timer in the kitchen to mark it as a practice time to tune into the senses. “Try to slow down and notice what’s happening as you cook. Try to stay with the sensory experience and not judge everything, like whether the carrot is cut right. It can be a very relaxing and peaceful way to work in the kitchen.”
Make the first few sips or bites of a meal mindful, spending the first few moments in silence if possible, says Bays. “Working quietly with that pile of carrots or onions, you have space to focus on just one task,” adds Merk.
Incorporating all of the five tastes of Buddhism—salty, sweet, sour, bitter and umami (savory)—is another way to bring meals in balance, according to author and priest Gesshin Claire Greenwood. “Having all of these flavors represented makes a meal feel balanced and satisfying.” 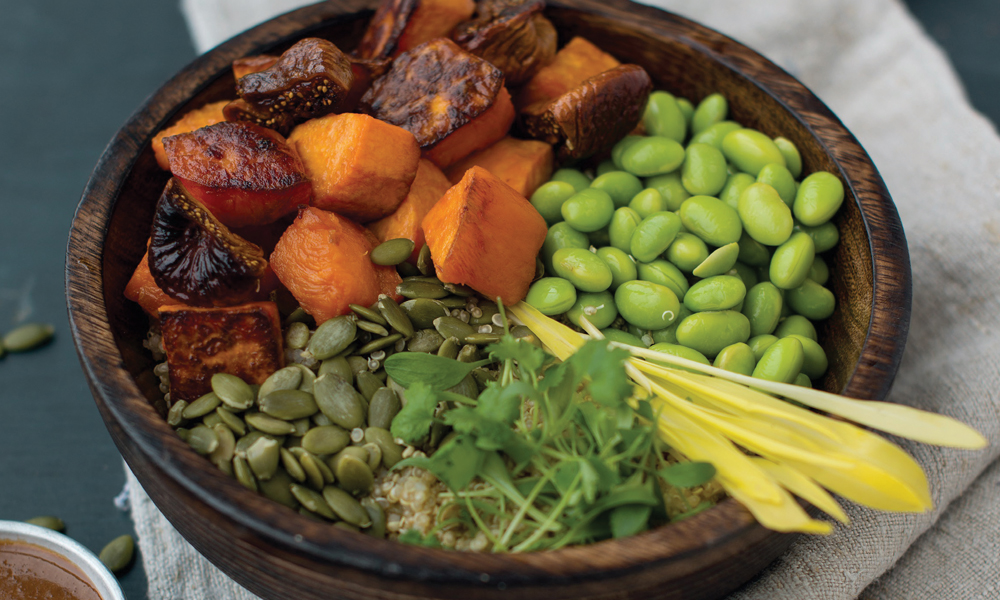 Cookbook author Jean-Phillippe Cyr says, “I love bowl recipes: they’re generous and colorful, and they let us get creative. Layer grains or cereals, vegetables, legumes and dressing, and voilà! That’s all there is to it.”

Pumpkin seeds are an incredible source of protein, and tahini contains more protein than milk. Healthy cooks will be sure to keep this tahini dressing recipe close, because they can use it in everything.

Preheat the oven to 350° F. Place the sweet potato and figs in a baking dish.

Drizzle with oil, then season with salt and bake for 30 minutes.

Place the ginger, garlic and salt in a mortar (preferred) or blender, then mash the ingredients together.

Transfer to a bowl and add the tahini, soy sauce, lemon juice, maple syrup and oil. Stir to combine.

Place the sweet potatoes and figs in a large serving bowl. Add the quinoa and edamame. Drizzle with the dressing and garnish. Serve immediately.

Tip: For those that can’t digest raw garlic, don’t use it, or cook it before adding it to the dressing. 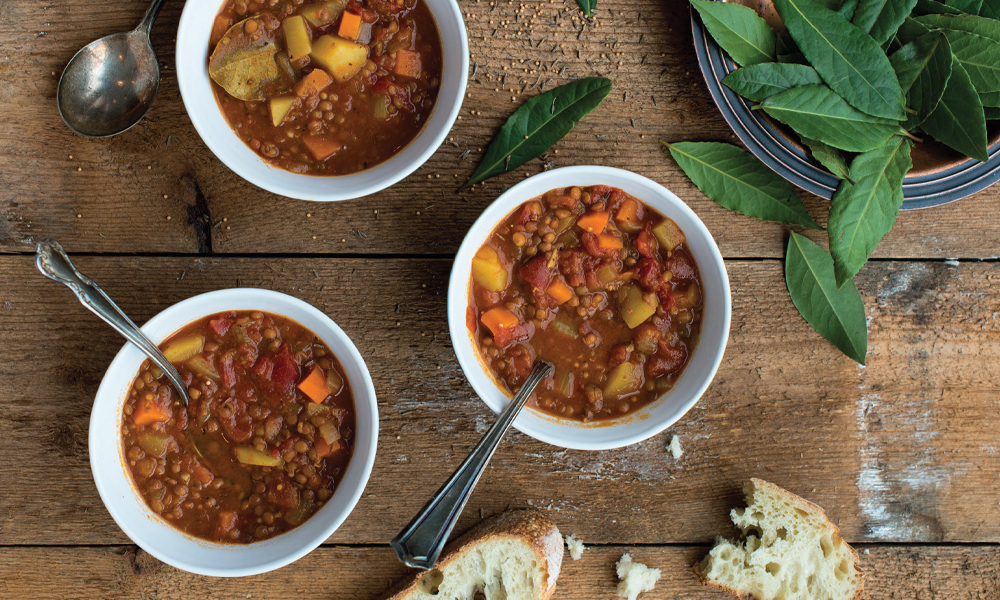 “This is hands-down my favorite soup,” says Cyr. “It reminds me of a Moroccan tajine, a savory stew made with vegetables and spices. The name tajine comes from the particular type of roasting dish in which Moroccan stews are cooked. There’s no need to buy any special equipment to make this recipe, but you will want to hunt down harissa, a North African chili paste you can find in most grocery stores nowadays. Be careful, though—it’s hot!”
Yields 8 to 10 servings

In a large pot over medium heat, heat the oil, then add the onions and sweat for 4 minutes.

Add the remaining ingredients and bring to a boil. Lower the heat, cover and simmer for 1 hour, stirring occasionally. Remove the bay leaves. Serve hot.


Excerpted with permission from The Buddhist Chef, by Jean-Phillippe Cyr. Photos by Samuel Joubert.

The 7 Chakras & How They Affect Your Life