by Ronica A. O’Hara
We don’t often think of children as having cardiovascular problems, but evidence is mounting that many youngsters today—because of scant exercise, poor eating habits and excessive screen time—are on track to experiencing serious heart and circulatory problems later in life.
“Instead of taking a wait-and-see approach by treating disease later in adulthood, we should help children maintain the standards of ideal cardiovascular health that most children are born with,” reports Julia Steinberger, M.D., director of pediatric cardiology at the University of Minnesota Medical School, in Minneapolis, and lead author of a 2016 scientific statement on children’s cardiovascular health from the American Heart Association (AHA).
In a March 2019 update, the AHA noted that fewer than 1 percent of children meet all seven criteria, or metrics, for ideal cardiovascular health; half of all children meet merely half the measures, which include physical activity, healthy eating, not smoking, attaining ideal body mass index (BMI), total cholesterol, blood pressure and glucose readings. Poor metrics in a child are linked to such adverse outcomes as heart attacks, heart failure and stroke in adulthood, advises Elaine Urbina, M.D., director of preventive cardiology at Cincinnati Children’s Hospital Medical Center, adding that poor metrics in teens are linked to fatty build-up in the neck arteries and arterial stiffness later in life.
But starting in utero, crucial strategies can promote strong cardiovascular systems in kids. Children born to mothers with low vitamin D levels have about a 60 percent higher risk of elevated systolic blood pressure between ages 6 and 18, reports a Boston Medical Center study in the journal Hypertension; vitamin D supplementation during pregnancy may head that off. Other important strategies include:

Get them moving. Children should be physically active at least 60 minutes a day, the AHA recommends, but among kids 6 to 11, only half of the boys and a third of the girls meet that guideline; by ages 16 to 19, merely one in 10 boys and one in 20 girls do. A review of 50 fitness studies in 28 countries involving 25 million children concluded that American kids today are about a minute and a half slower running a mile than their peers 30 years ago. 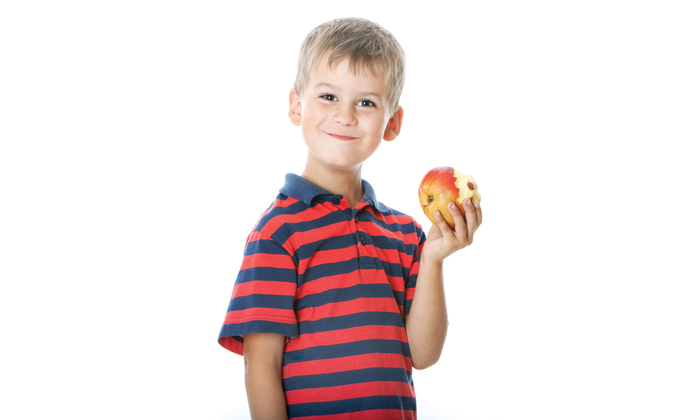 S-F/ Shutterstock.com
“Aerobic exercises like running, swimming and cycling use the big muscles of the body and are excellent ways of stressing and strengthening the heart and lungs,” says study author Grant Tomkinson, Ph.D., professor of education, health and behavior studies at the University of North Dakota. Even simply walking to school in the morning for 10 minutes reduces stress in kids and curbs heart rate and blood pressure increases, a University of Buffalo study found.

Feed them well. About 91 percent of U.S. children have what is classified as a “poor” diet that’s heavy in simple carbs like desserts and sugary drinks, the AHA reported. It recommends feeding kids a diet heavy in fruits, vegetables, fish and whole grains and low in sodium and sugary foods and drinks. A 2016 Centers for Disease Control and Prevention study of 2,142 children found that nine of 10 kids exceeded recommended sodium levels. A Cleveland Clinic study found that obese children eating a low-fat, plant-based vegan diet for four weeks began lowering their risk of heart disease by improving their weight, blood pressure, BMI, cholesterol levels and insulin sensitivity.

Don’t smoke or vape. The risk of a child developing carotid plaque in adulthood was four times higher if one or both parents smoked without taking care to limit the child’s exposure; when they did take care, the risk was still almost two times higher, according to an Australian study in the journal Circulation. Discouraging a teen from vaping is also critical to future health: New research from the University of Kansas School of Medicine shows that adults that vape are significantly more likely to have a heart attack, coronary artery disease and depression compared with those that don’t vape or use any tobacco products.

Restrict screen time. Australian 6-year-olds that spent the most time in front of TVs, computers and video games had narrower arteries in the back of their eyes—a marker of future cardiovascular risk—reported a study in Arteriosclerosis, Thrombosis and Vascular. A study from Canada’s McMaster University found that kids with video game addictions sleep less, which in turn elevates blood pressure, lowers helpful HDL cholesterol and raises triglycerides.