by April Thompson
When contemplating a shift toward a plant-based diet, some may prematurely mourn the loss of their favorite meaty classics. Luckily, enterprising vegan chefs have experimented with flavors and textures that will lure almost any palate into loving a plant-based version of their favorite dishes without resorting to processed foods.
“Plant-based versions of classic dishes offer all the nutritional benefits of plants without the cholesterol and saturated fats from animal products,” says chef and author Marly McMillen-Beelman. “You don’t have to abandon all your favorite foods to become vegan—just veganize them.”
The Kansas City chef makes carrot “dogs”, for example, by roasting carrots in a savory mix of tamari, agave, miso, paprika and garlic for a cookout-worthy treat. McMillen-Beelman’s cookbook The Everything Vegan Meal Prep Cookbook also offers many bean- and legume-based versions of classic sandwiches, like a vegan “Big Mac” with quinoa and pinto beans; a burger made from oats, black beans and pecans; meatballs from tofu and lentils; and a chicken salad based on tempeh, a fermented, soy-based, high-protein product with a nutty flavor.
“A lot of people like using tempeh, tofu or jackfruit for a meaty texture. It needs to be well seasoned, but so does meat,” suggests Ocean Robbins, author of The 31-Day Food Revolution: Heal Your Body, Feel Great, & Transform Your World. “To mimic cheese, some combination of nuts and nutritional yeast, cultured nut cheeses or plant-based milks works nicely.”
McMillen-Beelman likes using jackfruit for a “pulled pork” sandwich or taco, the tropical fruit being packed with vitamin C, protein, calcium, potassium and iron. Her slow-cooked version leans on whole-food ingredients, including pear and cranberries, to add natural sweetness and phytonutrients. “I use canned jackfruit because it’s much easier to find and cook with than the expensive jumbo whole fruit,” she says.
Ben Pook, the London co-author with Roxy Pope of So Vegan in 5, says mushrooms lend substance and umami flavor to vegan dishes such as a mushroom, sage and onion Wellington as a substitute for the classic beef Wellington. “We use portobello mushrooms for their meaty texture, which we surround with a sage and onion stuffing—all wrapped in vegan puff pastry to create a centerpiece worthy of any dinner party,” says Pook, whose cookbook features dozens of plant-based recipes that contain only five ingredients each, such as a broccoli alfredo with cashews, broccolini, tagliatelle pasta, nutritional yeast and garlic.
Nuts can also work wonders in a vegetarian dish, such as Pook and Pope’s walnut meat tacos, which blend toasted walnuts together with spices like cumin, paprika, garlic and chili powder to create a mince-like texture built into a taco with toppings galore.
Many classic dishes can also be adapted by simply leaving out the meat and letting the spices, herbs and vegetables shine through; for example, in a vegan shepherd’s pie, go with penne pasta with red sauce or a garlicky pesto with extra nuts, greens and olive oil in lieu of cheese.
Sweet tooth cravings can be satisfied with healthy, plant-based versions of classic desserts, substituting aquafaba (the starchy liquid left over from canned beans) instead of frothy egg whites, or olive oil or avocado for butter.
Nut butters can also add a touch of richness to a dish, whether sweet or savory. “I love making a peanut coconut milk curry soup with onions, mushrooms and bok choy, with peanut butter, lime juice and soy sauce blended into the coconut milk for a luxurious flavor and texture. It’s great over potatoes, quinoa or rice,” says Robbins.
“Vegan food doesn’t need to be expensive, boring or complicated,” Pook says. “There really are endless possibilities when it comes to cooking with plants, so don’t be afraid to experiment and create your own twist.”
Connect with Washington, D.C.-based freelance writer April Thompson. 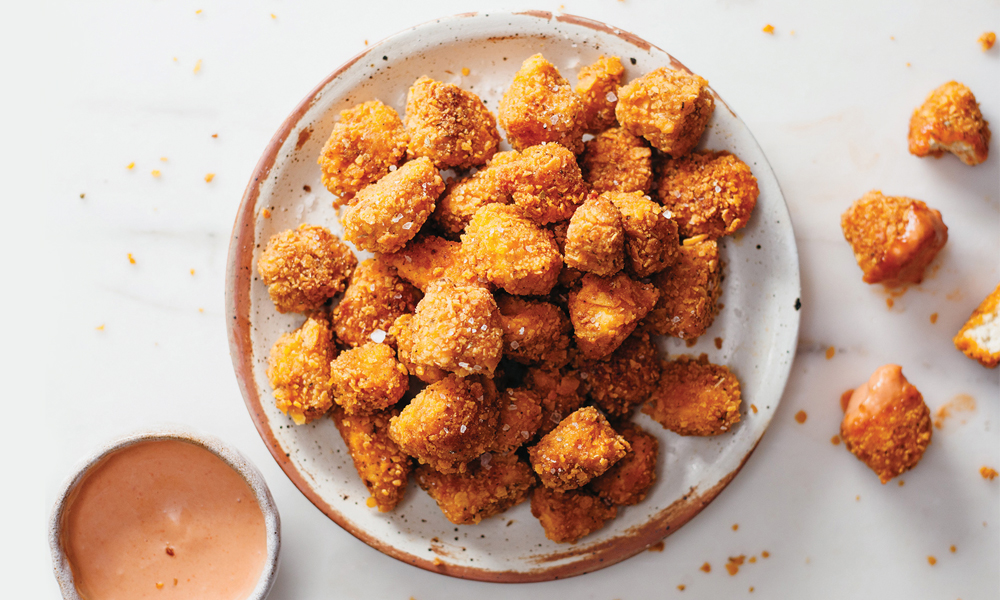 Crush the paprika crisps between a clean tea towel using a rolling pin until no big pieces remain. Transfer to a bowl along with the remaining dry ingredients and a pinch of salt and pepper. Use a spoon to mix everything together, then set aside.

Combine the plant-based milk and apple cider vinegar in a separate bowl. Let sit for a minute or two until the milk curdles and turns into a “buttermilk”. Then add the hot sauce and mix everything together until the ingredients are well combined. Set aside.

Meanwhile, add the flour to a small plate and set aside. Press the tofu if required. (Extra-firm tofu contains very little moisture, so this step isn’t always necessary.) Then slice the block in half and break the tofu into bite-sized pieces with hands.

Season the tofu on both sides with salt and pepper; dip tofu into the flour, followed by the milk mixture, then the crisp mixture. Repeat until all the tofu pieces have been coated.

Add the vegetable oil to a pan until it’s ¼-inch deep. Tip: Use a wok to reduce the amount of oil needed. Heat the oil on medium-high. Drop a tiny amount of the dry mixture; if it starts sizzling as soon as it hits the oil, it’s ready.

Carefully add half a dozen or so tofu pieces to the hot oil and fry for about 2 minutes on each side or until the tofu begins to brown and is extra crispy. It’s important to not overcrowd the pan, as it can lower the temperature of the oil.

When the tofu is ready, carefully remove it from the pan and transfer it to a plate lined with parchment paper; immediately season it with some extra salt, which will help make it even crispier. Repeat until all the tofu pieces are cooked. Serve with a favorite dip, such as one made by combining equal amounts of tomato ketchup and vegan mayo.

Adapted from So Vegan in 5 by Roxy Pope and Ben Pook. 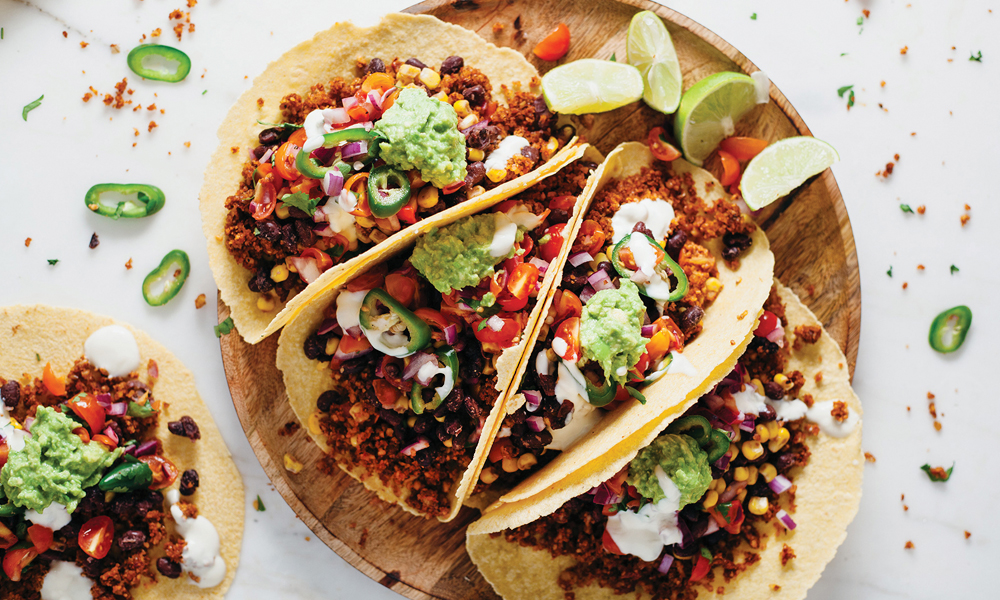 Toast the walnuts in a pan over a medium heat for 6-8 minutes or until they begin to smoke. Keep an eye on them and stir occasionally to prevent them burning. Then peel and dice the garlic and add it to the walnuts along with the smoked paprika, chili powder and ground cumin. Stir to coat the walnuts in the spices, then cook for 2 minutes.

Add the cooked walnuts, garlic and spices to a food processor along with the balsamic vinegar, maple syrup, sun-dried tomatoes (drain as much oil as possible) and a pinch of salt. Process for a minute or two until the walnut mixture turns into a mince-like texture.

Next, prepare the salsa by slicing the cherry tomatoes into quarters and transfer them to a mixing bowl. Peel and dice the red onion, slice the chili (leave the seeds in if spicy is preferred) and roughly chop the cilantro leaves, adding all to the mixing bowl. Squeeze the juice from the lime into the bowl, along with a generous pinch of salt and pepper, then stir to combine. Meanwhile, heat through the tortillas in a pan over a low-medium heat.

Slice the avocado in half and remove the pit. Scoop out the flesh and mash it in a bowl along with juice from half a lime.

When you’re ready to assemble your tacos, spoon a few tablespoons of the walnut mixture on top of a tortilla, followed by the bean mixture, salsa and a dollop of mashed avocado. Top with a drizzle of vegan yogurt. Repeat for the remaining tacos.

Adapted from So Vegan in 5 by Roxy Pope and Ben Pook. 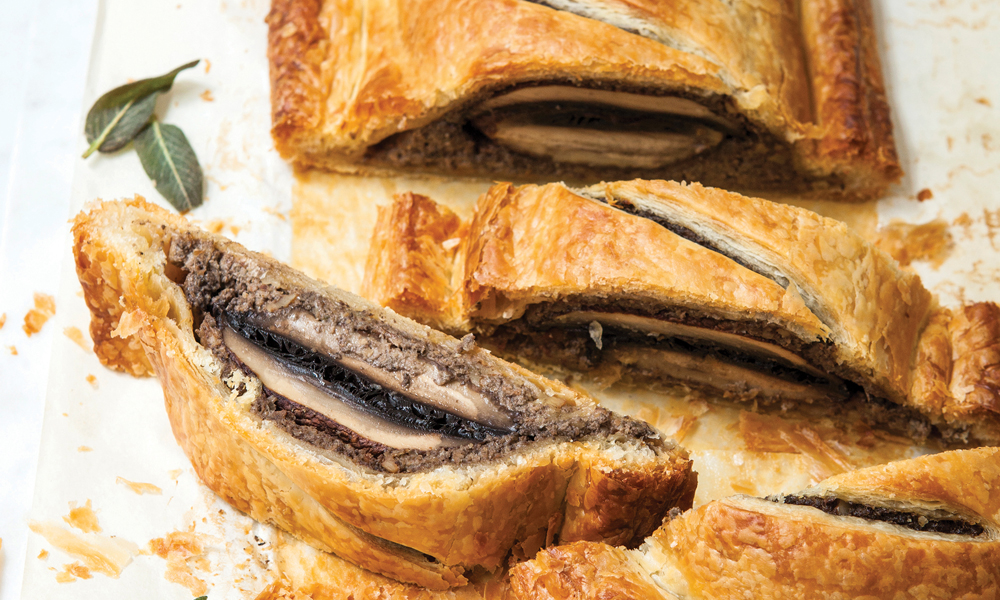 photo by Andrew Hayes-Watkins
An absolute showstopper and the perfect dish to make for friends on a Sunday afternoon alongside some tasty, roasted vegetables.

Preheat oven to 425° F and line a large baking tray with baking paper. Wipe any excess dirt off the mushrooms and place five of them in an ovenproof dish. Drizzle with olive oil and season with sea salt and pepper, then bake for 15 minutes. Remove the mushrooms from the oven and set aside, leaving the oven switched on for later.

Meanwhile, quarter the remaining mushrooms; peel and roughly chop the onions and add to a food processor along with sage leaves, walnuts, ½ teaspoon of salt and 1 teaspoon of pepper. Process to form a smooth paste, then fry in a pan over a medium-high heat for 15 minutes, stirring frequently. Set aside to cool for 10 minutes.

Roll out one sheet of pastry onto the lined baking tray. Spread a third of the paste down the middle of the pastry lengthways, spreading it 2 inches wide and leaving the same length clear at each end.

Place the second sheet of pastry on top and use your fingers to seal the edges together. Trim around the Wellington roughly one inch away from the filling, discarding the excess pastry as you go. Lightly score the Wellington with diagonal lines at 1-inch intervals and brush with olive oil. Bake in the oven for 50 minutes, until the pastry turns a lovely golden brown. Remove from the oven and serve in slices.